The newly established National Records and Information Management Development Committee (NRIMDC), a component of the Right To Information strategy, is convening its induction meeting at the National Library conference room today 5th April 2017. 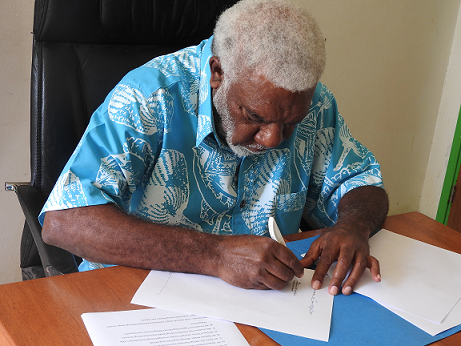 The Acting Prime Minister Joe Natuman has today signed the first RTI enforcement order bearing names of 7 government agencies that the RTI law applies to them. The signing of the Order at the Ministry of Trade was one of the first of its kind to be made in front of the media.

The order means the seven government agencies are obliged to fulfill the purpose of the RTI law which are to give effect to the right to freedom of expression under Article 5(1)(g) of the Constitution of the Republic of Vanuatu. They are also to provide access to information held by their respective offices, subject to exceptions provided under Part 5 of the RTI Act.

In addition, the seven government agencies must establish voluntary and mandatory mechanisms to give the public the right to access to information; and to promote transparency, accountability, and national development by empowering and educating the public to understand and act upon their rights to information in their respective offices; and to increase public participation in governance.

Acting Prime Minister Natuman, who is a strong advocator of transparency and accountability in public offices, has reassured the media that the government is fully committed to ensuring RTI implementation in all public offices and that the signing of the enforcement order this morning comes as a new page in the RTI implementation phase. He said the second order will be issued within 2 years from today and will include other government agencies and government statutory bodies. The last and final enforcement order will be issued at the end of the two year period.

In the meantime, all public offices that are not yet covered under the first order must put in place all relevant mechanisms to cater for RTI.